The design foundations of the for the dynamic excellence for which new McLaren 720S Spider are shared with the 720S Coupé, the organic shapes that comprise the second-generation McLaren Super Series combining to maximise downforce, minimise drag, enhance powertrain cooling and optimise aerodynamic balance. The forms also produce an overall appearance akin to afuturisticsculpture,styledbytheairthat flows over, under, around and through it.

For the new Spider, a new, electrically actuated Retractable Hard Top (RHT) and new buttresses were seamlessly integrated into the design. Like all McLaren cars, the 720S Spider has a carbon fibre core, in this case designated Monocage II-S. The strength, rigidity and light weight of the structure is the base for the dynamic excellence for which McLarens are renowned; the Monocage II-S is a development of the Coupé ’s Monocage II, without the central ‘spine’ running front to rear above the cabin and with the rearmost section of the upper structure also unique, to accommodate the Retractable Hard Top. The header rail across the top of the windscreen has also been revised, to suit the RHT sealing.

Comfortably the lightest car in its competitive set, with a lightest dry weight of 1,332kg – 88kg less than the 1,420kg dry weight of its closest rival – the new 720S Spider is also lighter by 9kg than the first-generation Super Series 650S Spider, as well as having enhance refinement.

The new Spider weighs in just 49kg – or less than 4% – above the 720S Coupé, the difference primarily associated with the RHT and tonneau system. The low weight – and stunning power-to-weight ratio of 540PS-per-tonne (in comparison to 485PS for the 650S Spider) – is the foundation for the dynamic, performance and efficiency benefits enjoyed by owners of McLaren cars. 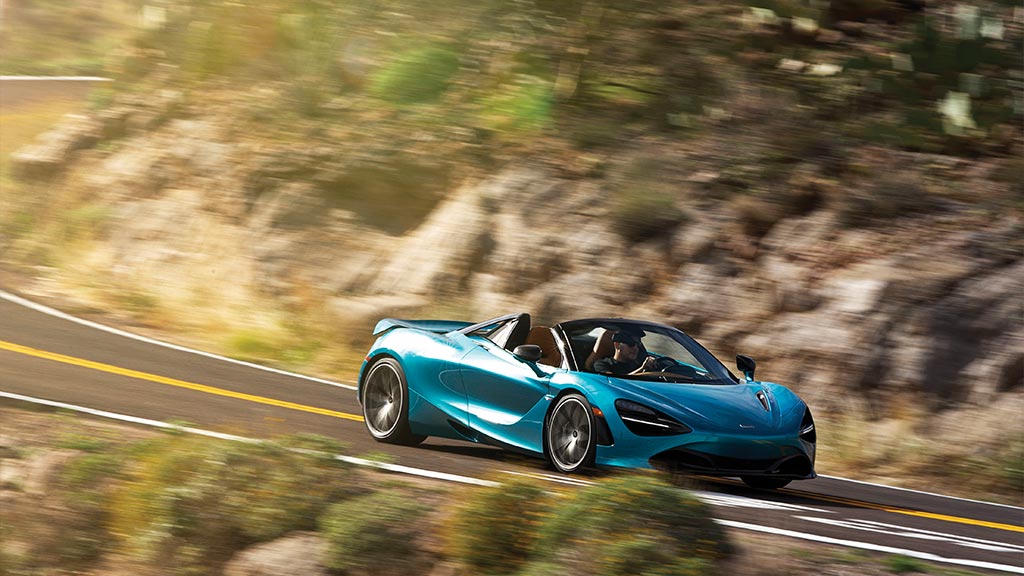 The new McLaren 720S Spider offers an unparalleled blend of extreme performance, crafted luxury, driver involvement and daily usability – all with the additional exhilaration of open- air driving whenever required. As the most accomplished convertible supercar ever, the new Spider delivers across a remarkable spectrum of abilities to outstandingly high levels, and as lightest in class with an increase of just 49kg over the 720S Coupé, moves us even further ahead of our competition in the weight race. – Mike Flewitt, Chief Executive Officer, McLaren Automotive

Engineering ingenuity, underpinned by the inherent qualities of carbon fibre, means that despite the removal of the fixed roof there is no need for additional reinforcement to maintain structural strength and rigidity; even the unusually slim windscreen A-pillars first seen on the 720S Coupé remain. To further enhance rollover protection for occupants, fixed carbon fibre supports – which are visible externally – were engineered into the rear of the Monocage II-S, additionally providing the main anchor points for the roof system and the seatbelts.

The cockpit-like design of the 720S Coupé is recognised for the sense of 360-degree vision it provides, allowing light to flood into the cabin and setting a new benchmark for visibility. This philosophy of unrivalled vision is central to the second-generation Super Series and the new Spider moves the game on again, with unique, glazed flying buttresses further aiding driver visibility as well as adding visual drama to the car.

The leading edge of the buttress features an aerodynamic carrier to guide airflow, before dramatically tapering off to expose darkened glazing; the design and the use of glass delivers a 12% improvement in over-the-shoulder visibility compared to the previous McLaren Super Series Spider.

The 720S Spider marks a revolutionary step forward in our pioneering use of carbon fibre technology. Every McLaren built since 1981 has had a carbon core,but this is the first time a convertible has featured a carbon fibre upper structure. The windscreen surround, the rollover protection system and the architecture above the powertrain – in fact all integral parts of the new Monocage II-S – are constructed of carbon fibre, as is the new Retractable Hard Top (RHT), including the frame and exterior panel. – Andreas Bareis, Vehicle Line Director – Super Series, McLaren Automotive

The new 720S Spider epitomises cutting-edge elegance. The striking lightweight aluminium bodywork is ‘shrink-wrapped’ around our pioneering carbon fibre structure, and the dihedral doors feature an innovative double-skin that channels air into the side radiators. The beautifully sculpted body is able to integrate our state-of-the-art aerodynamic excellence due to our designers and engineers working as one – we’re also particularly proud of the new glazed flying buttresses. The result is a truly stunning supercar. – Rob Melville, Design Director, McLaren Automotive

Fast moving, high-energy air coming from the sides of 720S Spider is guided through the aerodynamically sculpted shape of the glazed flying buttresses, creating a high-pressure zone over the rear tonneau cover and engine bay to reduce rear axle lift. Thanks to the innovative glazed solution, rearward visibility is not impeded, enhancing daily usability and driver confidence.

A supercar of unrivalled sophistication and luxury 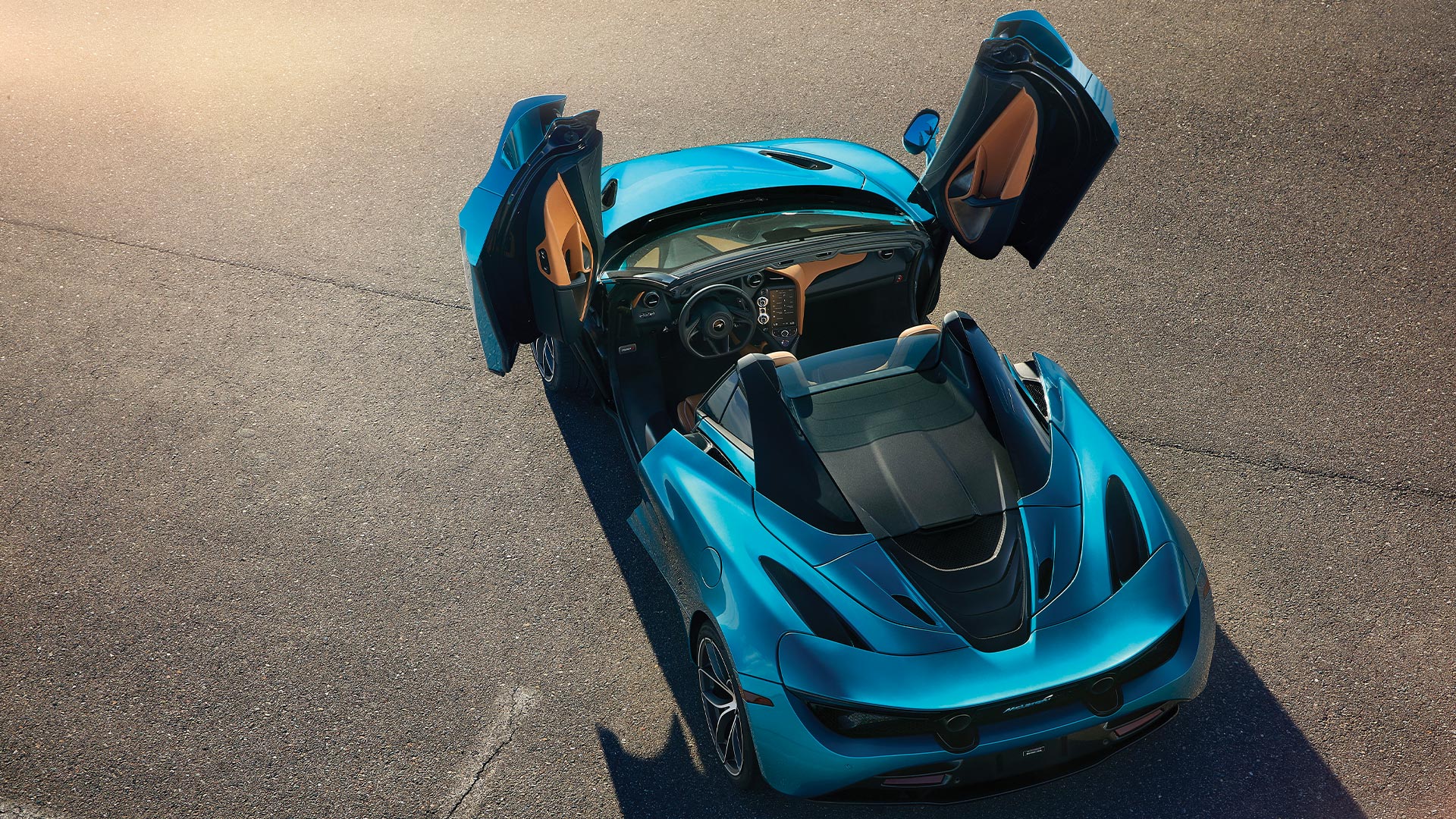 The 720S Spider further widens the breadth and depth of abilities of the second-generation McLaren Super – Rob Melville, Design Director, McLaren Automotive Series. The new Retractable Hard Top brings the intense thrill of an open-top supercar on demand, while the glazed roof option with electrochromic glass means our customers can experience the light and airy ambience of a Spider all-year round with the roof up if they prefer. This is supercar that satisfies a driver – and passenger – in a way that no competitor can. – Jolyon Nash, Executive Director – Global Sales and Marketing, McLaren Automotive

Engine response – both on- and off the throttle – has been calibrated to deliver the optimum blend of immediate reaction and progressive control, ensuring absolute driver involvement. Under full acceleration, the power delivery builds relentlessly through the rev range, encouraging the driver to hold each successive gear to over 8,000rpm.

Matching the feeling of the powertrain is its exhilarating sound, enhanced further when the rear window is lowered, or when the Retractable Hard Top is stowed completely. The twin-exit stainless steel system delivers a scintillating supercar soundtrack that is clean and crisp, and rises with engine rpm and engine load to deliver a thrilling crescendo.

The beautiful materials used throughout the interior of the 720S Spider highlight the high level of quality across the vehicle. Not only are the leathers, Alcantara® and other materials remarkable, but the comfort and convenience characteristics are particularly noteworthy. All the controls in the cabin of the 720S Spider are as precisely engineered and tactile as they are visually appealing. Even the smallest details have been given forensic attention, with delicately crafted machined switchgear used extensively throughout the cabin, and unique stitching patterns developed specifically for second-generation Super Series featuring on the leather. An air of sophisticated luxury is evident throughout the interior, ensuring the driver enjoys the ambience and indulgence of the cabin environment as much as they do the thrilling driving experience.

The new 720S Spider is available in three grades of specification, with the Performance and Luxury models extending above the standard 720S model to create cars with their own character and ‘feel’. The 720S Spider Luxury, for instance, is the perfect long- distance cruiser, with power-adjust heated memory sports seats for both the driver and passenger and a meticulously appointed ‘By McLaren’ interior featuring the finest Nappa leather hides. By contrast, the 720S Spider Performance specification features a ‘By McLaren’ interior trimmed predominantly in tactile, lightweight Alcantara®, the focused nature of this specification accentuated inside and out with carbon fibre. 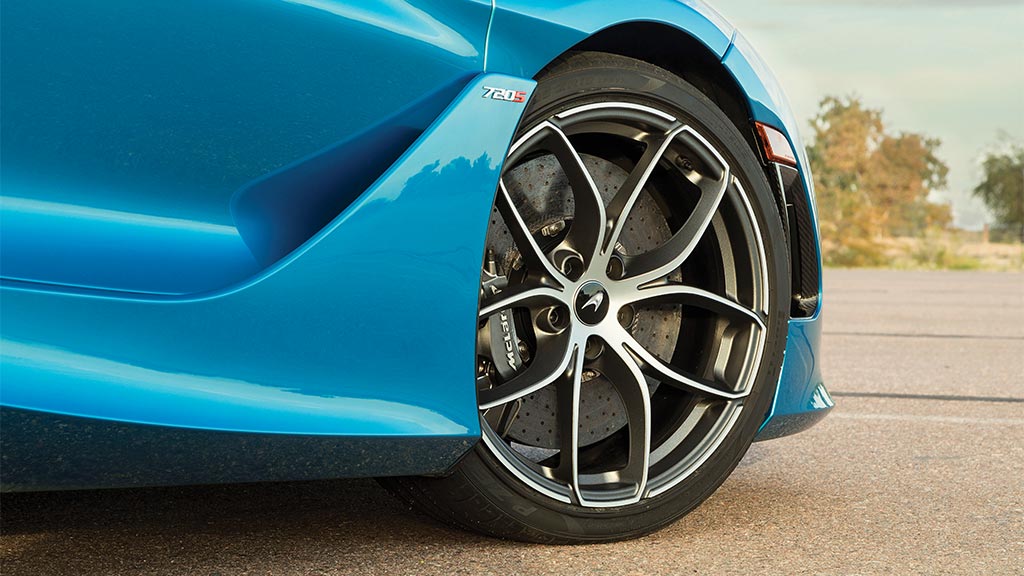 The driver and their passenger sit as standard in sports seats that have not only been developed to deliver the perfect amount of lateral support, but at the same time supreme comfort for cross-continental trips. Owners can choose to replace the standard leather-wrapped sports steering wheel with colour-matched, carbon fibre enhanced or Alcantara® options – but the wheel always remains free of buttons and switches, a McLaren trademark.

A centrally-mounted 8.0-inch high- resolution Central Infotainment Screen is the primary hub for vehicle convenience, comfort and connectivity functions. The interface displays audio, media, navigation and other convenience features – such as mood lighting colour – with rich, crisp graphics. All key applications are displayed on a vertical carousel, as well via several dedicated quick-access ‘hard’ keys below the screen. For optimum usability, the climate control function remains fixed to the bottom of the screen.

The ground-breaking system for the second-generation Super Series delivers pure, engaging sound through the implementation of key Bowers & Wilkins’ acoustic technologies, including the first automotive application of Double Dome tweeters. Performance is maximised and unadulterated sound – this time not from the exhaust system – takes the driving experience to completely new heights.

A convertible can be dynamically compromised compared to a Coupé, but at McLaren our carbon fibre structures do not require strengthening, so no weight is gained and no rigidity is lost. That means the 720S Spider drives just like the ground-breaking 720S Coupé; one moment it is our most luxurious and sophisticated supercar and the next it is track-focused and capable of astonishing lap times. And the best thing of all is that whichever character you want to bring out, you can lower the roof and experience the added exhilaration of open-air driving. – Kenny Brack, Chief Test Driver, McLaren Automotive

All stories by:admin
Login to https://forummagazine.ca
Reset Password
Enter the username or e-mail you used in your profile. A password reset link will be sent to you by email.